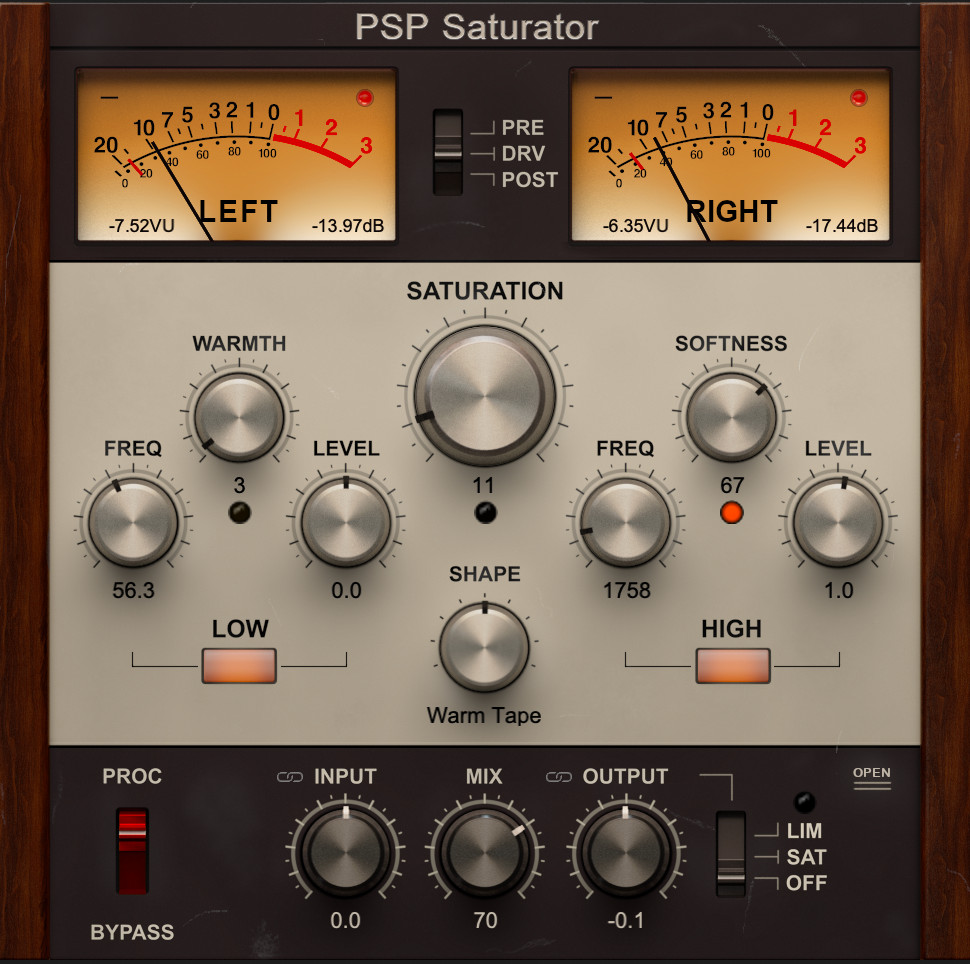 A new addition to the PSP Audioware lineup, PSP Saturator brings its refined algorithms and pushes the quality of saturation to a new level and can virtually heat up your production.

PSP Saturator emulates the way that analog devices such as tape recorders and valve circuits warm up and “saturate” your audio material. This is achieved by adding harmonics, dedicated filtering, and dynamic processing. PSP Saturator uses three algorithms to emulate these devices, and offers eight different shape modes for loads of flexibility from subtle 'mix mojo' to outright audio destruction.

In order to run PSP Saturator in 30-day trial mode or activate it, you don't need any hardware dongle but you need an iLok user ID which you can create for free at www.ilok.com, and you need to install the free iLok License Manager application.

You can activate the license in 3 separate locations, each of which can be either a computer or an iLok dongle (2nd generation or above). You can move these licenses at any time using PACE's iLok License Manager software.

Excitement has been buzzing around the PSP office (well, remote offices) with all the stirrings that come with a new plug-in release. We’re very excited to share our latest creation with you, and we’ve been thrilled with the reception so far! We are truly inspired by the support and praise we receive from our users with each new release, and we are humbled to see our creations in use in your studios whether you’re working on your next demo, recording your first album, creating soundtracks for AAA games, or crafting the next Billboard charting single.

Inevitably, with a new plug-in come questions: What is this plug-in for? What makes it different from my other favorite PSP plug-ins? Is Antoni truly the tallest person in pro-audio? (we’re pretty sure on that last one)

These are the questions that keep us up at night too, and we figure it’s time to share some insight to clarify a few things with you!By far, the most asked question we’ve received is how the PSP Saturator, our new premium saturation plugin, is different from the ‘modern classic’ PSP VintageWarmer. In short, on a fundamental level these are entirely different plug-ins designed for different sounds and applications with a very narrow field of functional overlap.

PSP VintageWarmer is our take on the classic ‘mojo’ of analog signal processing combining the sound of vintage equipment’s color and tone with multi-band dynamics processing offering everything from ‘just a bit of heat’ to ultra-precise master buss dynamics processing to give a mix that final sense of fullness and punch. While this may seem similar to saturation, the approach and methods of achieving the tone of what PSP VintageWarmer adds to a mix are entirely separate from our new plug-in.

Now, how about the new PSP Saturator vs. the Saturator module of PSP InfiniStrip? Although these two appear very similar on the surface and do share a few bits of their sonic DNA, there are a few key changes under the hood! PSP Saturator includes many more options to deeply refine the overall tone and character of the saturation like the included High Pass Filter (HPF), the output saturation/limiter stage, and the inclusion of two additional saturation shapes (for a total of 8 instead of PSP InfiniStrip’s 6).

The FAT quad-oversampling toggle is also new to PSP Saturator, along with the dedicated High and Low frequency algorithms to further refine the sound. With the addition of the precise stereo metering, as well as a few other under-the-hood enhancements PSP Saturator receives many upgraded features from the Saturator module of PSP InfiniStrip.

PSP Saturator is based on the concept of the now legendary PSP MixSaturator which was developed 20 years ago (time flies, huh?). About two years ago, we decided it was time to reintroduce this concept and bring it up to modern standards, as well as use this opportunity to implement what we’ve learned in the last few decades of plug-in development.

During the long months of the development cycle, it became apparent to us that each part of its algorithms had to be written from scratch, or at least seriously redesigned based on what we’ve learned in our DSP escapades in the last 21 years.

We didn’t want to simply copy the older engines, and we quickly realized this was time for a total refresh of one of our most lauded plug-ins while still keeping true to its roots. By extending the development process and critically analyzing all we had learned, not only would be be able to address some of the original’s weaknesses; we could adopt support for retina screens, design scalable interfaces, and introduce oversampling support up to a whopping 384Mhz for the most pristine sonic quality available!

With changes comes compromise though - in many cases, we realised that keeping backwards compatibility was no longer possible due to the range of changes to virtually every aspect of the plugin and the number of new parameters to add even more detailed control that wasn’t possible before.

By this point, we realized we could further fine-tune the plug-in by refreshing every single algorithm inside of PSP Saturator to ensure it was the best possible form of saturation no matter what flavor you choose. With the support of top mixing engineers and producers, and a relatively long beta process, we meticulously refined each algorithm to win the hearts (and more importantly, ears) of some of the most discerning and demanding users in the industry.

The result of all this cooperation, testing, development, and teamwork is truly stunning - while at its core, the concept stems from our classic PSP MixSaturator we are confident that this plugin represents the best form of what we can currently offer by combining our 21 years of development experience to create something with unrivaled quality and versatility that is ready to stand the test of time for the next 20 years.

With that said, it is now time to retire and say a bittersweet farewell to our long-time friend PSP MixSaturator. Going forward, it will be considered a legacy product with no further support as it has been replaced and redesigned with it’s legacy living on in this new release.

PSP Saturator brings an all-new product that implements the latest and greatest in terms of both DSP and support for modern systems with compatibility for Windows 11, macOS Silicon, extensive oversampling, and the most pristine saturation we can offer.

As usual, we recommend you rely on your own ears, experience and needs when it comes to plug-ins. We’d encourage all users to download the free demo version and play with it for 30 days before making any decision.

After all, if we’ve learned one thing in the last 21 years:

It’s The Sound That Counts!