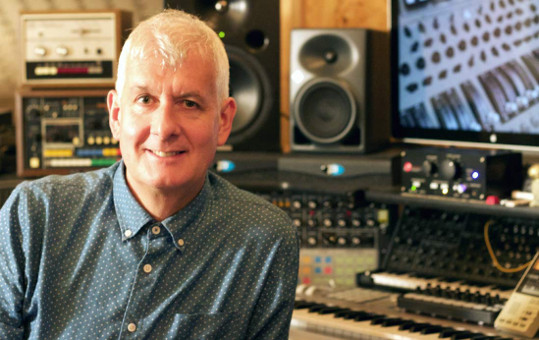 Starting as a tape-op at CBS studios in 1975, Steve progressed to in-house engineer and worked with many new wave, punk & pop acts including The Clash, The Jags, The Vibrators, XTC & Sailor.

Steve has collected a number of prestigious industry awards including a Brit Award, Musicweek Award and a Grammy for his work with Deniece Williams.

He has appeared on many radio and TV programs, is a regular guest presenter of the newspaper review on BBC weekend Breakfast and on BBC6 Music with his own show.

He has also presented The Record Producers Live Editions with special guests, including Legendary Motown producer Lamont Dozier, and a walking Audio Tour for Mary Wilson at the V&A.

Steve produced the Vapors new album, the first new material from the band for 40 years. The lead single reached number 1 in the UK Heritage chart for 2 weeks and the album entered the main chart on its release. The album has been critically acclaimed and continues to sell well with the fans.

Along with games producer MILKY TEA, Steve has created the soundtrack to a video game HYPERBRAWL. The game is available on Apple Arcade and all major gaming consoles and platforms and the OST version of the game soundtrack music released by SONY MUSIC.

Recent projects include recording Liverpool band HUSHTONES debut album due for release this Summer, tracks have been featured on BBC Introducing, Radio 1 and BBC6 Music.

Steve was recently commissioned by BBC World Service to produce the music for U.Me the Musical, expressly to draw attention to the current plight of the theatre world in the midst of the current pandemic. All written, rehearsed and recorded under COVID restrictions, quite a challenge!

Favorite PSP Plug-ins: all of them.

"I've been a fan of PSP plug-ins almost from day one, which is now nearly 17 years. I was thrilled and honoured when I finally met the VERY tall Antoni in person  at a trade show, his passion for audio and DSP plug ins is apparent from the second you meet him. Every time a new plug in is released it gives me hours of creative pleasure. AND whenever I use something like "PSP VintageWarmer" the artists say …."what was that you just did" …almost anything sounds better with it  …and the recent  PSP FETpressor has the same effect on drums and vocals. The new spring reverb is destined to be a new classic along with some of many other great plug-ins they make."